*mens legis* the mind of the law,

means the mind of the law;

that is the PURPOSE, the SPIRIT,

or the INTENTION of a LAW, 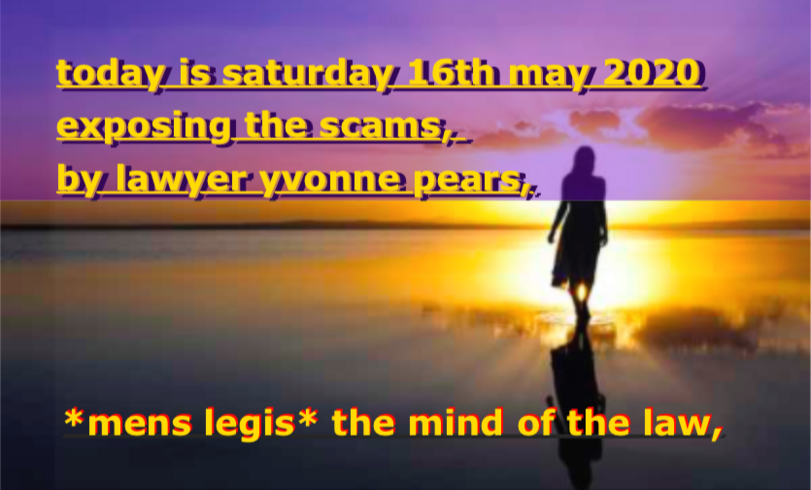 [6] any Bailiffs, claiming to act on behalf of these Private Companies

are required to by Law to provide a Signed and Authorised letter, from the Private Company,

to Confirm that they are acting

watch this space, coming up next,

the scam of false imprisonments,

without *due process of law*

and *rights to trials*

*due process of law* amongst other things, firstly enables us to,

Question the Lawfulness and the Legitimacy

of any allegations claimed, or filed against us,

i will use the Coventry Universal Hospital

as a Typical Example,

1] for many years, people knew that

were operated by a Barrier and a Ticket Machine

incorporated with a Speaker for the Parking Payments, of which enabled you to speak to the

2] in the dark months of Christmas last year,

left the Barriers Up in the Car Park, that leads Directly into ACCIDENT AND EMERGENCY,

HUNDREDS OF INNOCENT PEOPLE have been wrongfully caught out by this SCAM,

whom have been threatened and forced to pay UNLAWFUL FINES,

where MANY APPEALS, AGAINST THE UNLAWFUL FINES HAVE HAVE BEEN LOST,,

THE INTENTION OF THE LAW-MAKER,

are required to have the backing of the Courts,

to enable them to have upheld their Fines,

4] in order to have BROKEN THE LAW,

OR TO BE FINED, the LAW REQUIRES,

[A] Criminal Intent, such as Knowing that you are committing an offence,

and the exact details of the alleged offence,,

or you should have known that

what you have done, constituted an offence,

are using AN UNLAWFUL DEFENCE, TO SCAM MONEY from the unaware public,

this is due to the fact that their Defence Claim is;

>that they had placed a notice up at the car park,

that everyone could see <

in actual fact, their defence proves itself to be against the law, due to the fact that;

*mens rea* has to be PROVEN, beyond all doubt,

before fining or imprisoning the public,

and as soon as the first 25-people had not adhered to the parking notice, then it was obvious that,

WAS NOT MADE NOTICEABLE TO THE PUBLIC,

and also, because they have fined hundreds of people for, NOT noticing their notice,

THIS IS PROOF THAT THEIR NOTICE IS DELIBERATELY KEPT DISCREET, TO SCAM THOUSANDS OF POUNDS FROM THE MOST VULNERABLE AND DISTRESSED PEOPLE

WHOM ARE ATTENDING EMERGENCY SERVICES,

IT IS THE PRIVATE HOSPITAL CAR PARKING,

THAT HAVE *mens rea* Criminal Intent,

a Guilty Mind, and Guilty Knowledge