7] MARIA MADE IT KNOWN TO THE CAMERA ENFORCEMENT MANAGER,

THAT SHE REQUIRED THEIR PROOF OF CLAIM,

see below, Copy of Letter From maria,

To The Camera Enforcement Unit Manager,

making it known to them that;

A] she received their notice out of time,

B] she is not the only user of the vehicle,

C] no accident or collision had taken place

D] and if she doesn't receive Photographic Evidence within seven days,

from the date of the letter, she will

assume this matter is closed, 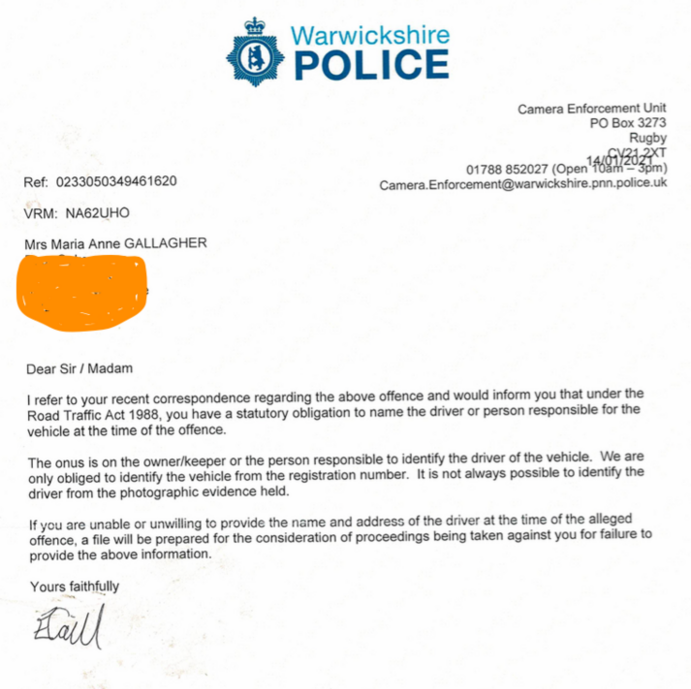 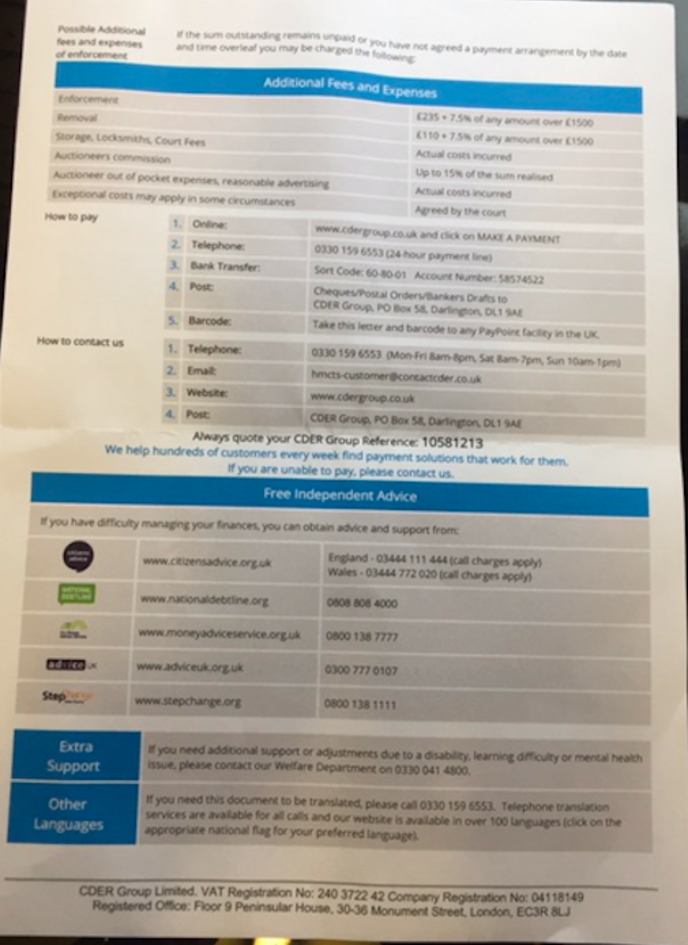 copy of maria's 18th may email,

with attached copies of

of the WARWICKSHIRE POLICE, whom

22] REFUSED TO REPLY TO maria,

AND CONFIRM, WHETHER OR NOT,

HE HAD AUTHORISED THE UNSIGNED CHARGE SHEETS THAT HAD BEEN POSTED TO HER, 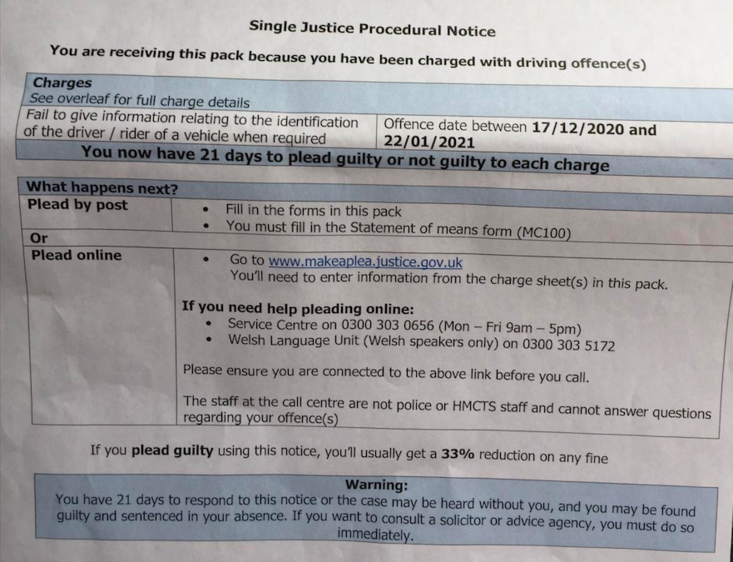 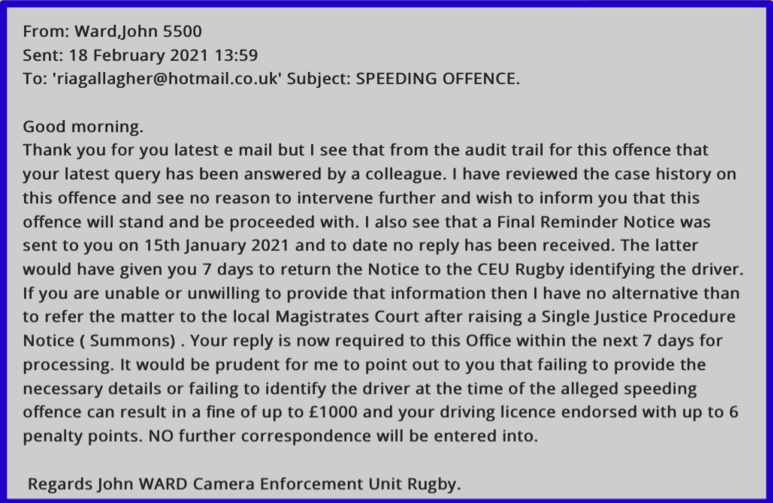 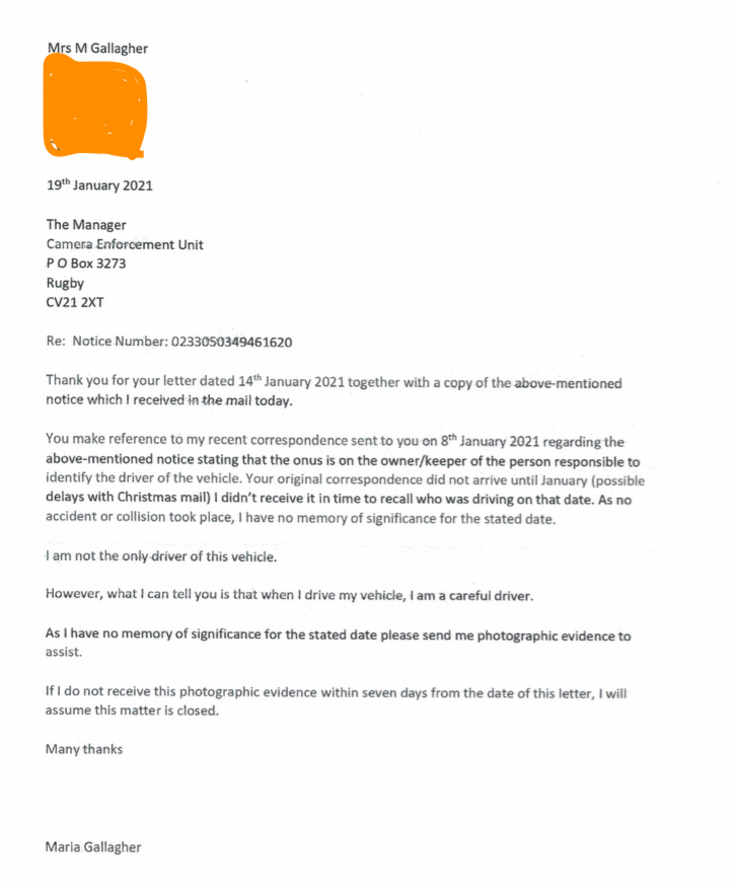 'A COPY OF AN UNSIGNED LETTER'

CLAIMING TO BE A COURT ORDER,

'WHOM ARE UNLAWFULLY ACTING

AS AN ONLINE COURT'​

DUE TO THE FACT THAT MARIA WAS NOT INVITED

on the 8th of january 2021, maria gallagher received

​that was from no one, because it was UNSIGNED,​​​​

our rights are from God,

of which No MP, No Government, and No Court,

has authority to trespass against, 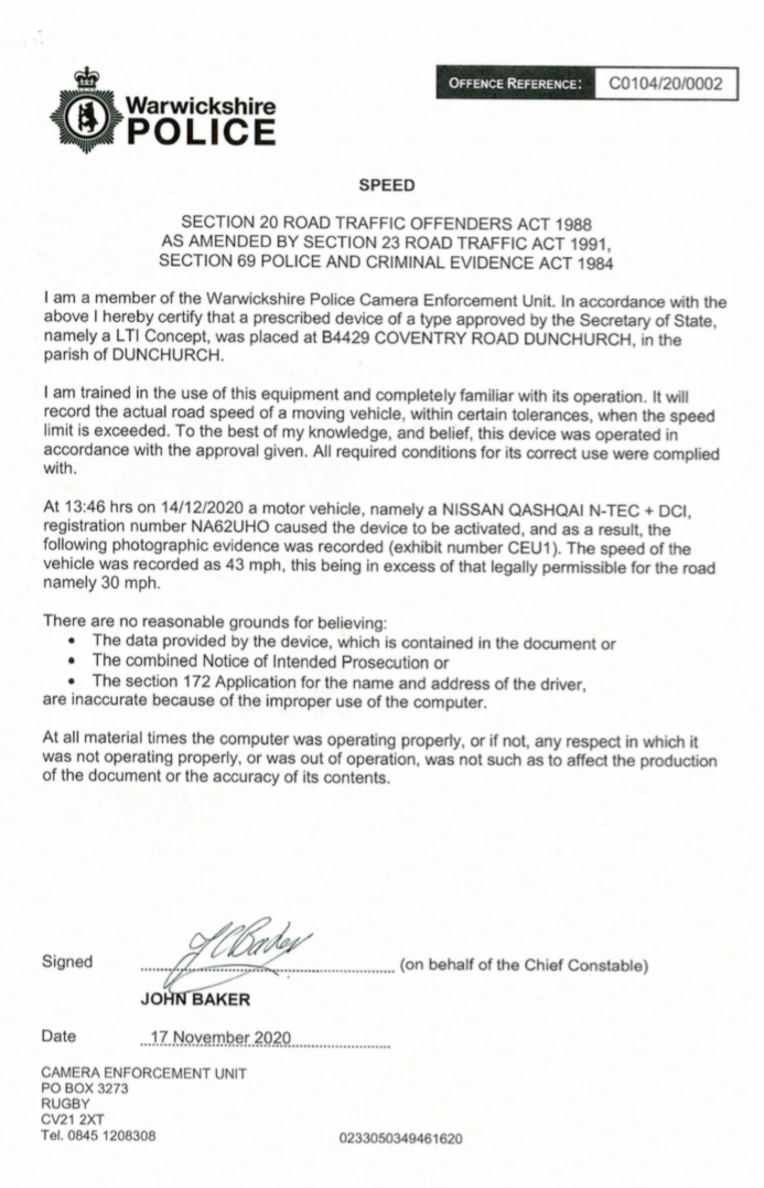 GIVEN ANYONE, ANY CONSENT WHATSOEVER,

TO USE HER INVENTION,

OF HER ON LINE COURTS,,​

3] the notice is NULL AND VOID,

and, CONTRARY TO COMMON LAW ,

NO HARM WAS CAUSED,

it was UNSIGNED, and OUT OF TIME,

*inter alia* [amongst other things]

Priti Patel is paid by the public, to oversee and manage the Police, and their training,

therefore she holds the Liability for the

actions of the Police and their crimes,,

a finding of guilty is required,,

a finding of not guilty is required,,​ 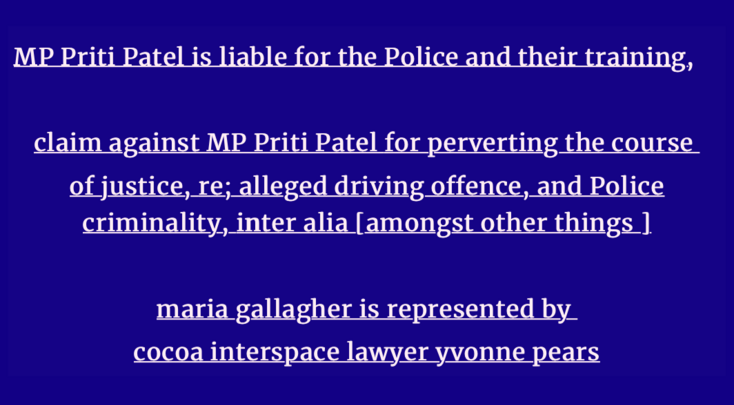 and her copyright' without her knowledge or consent,

to maria, from the Camera Enforcement Unit,,

12] IF MARIA IS UNABLE TO PROVIDE INFORMATION IDENTIFYING THE DRIVER, AT THE TIME OF THE ALLEGED SPEEDING OFFENCE,

then NO Further Correspondence will be
entered into, and He will Refer the Matter to the
MAGISTRATES COURT, AND RAISE A SUMMONS,

24]see below, A COPY OF A SECOND UNSIGNED LETTER, FROM A MAGISTRATES COURT,

AGAIN, CLAIMING THAT IT IS AN ORDER,

FOR A DRIVING ENDORSEMENT,

OF WHICH IS REQUIRED TO BE SIGNED,

TO PROVIDE CLEAR AND CONVINCING EVIDENCE

see below a copy of

15] THERE IS NO JURISDICTION OVER MARIA, 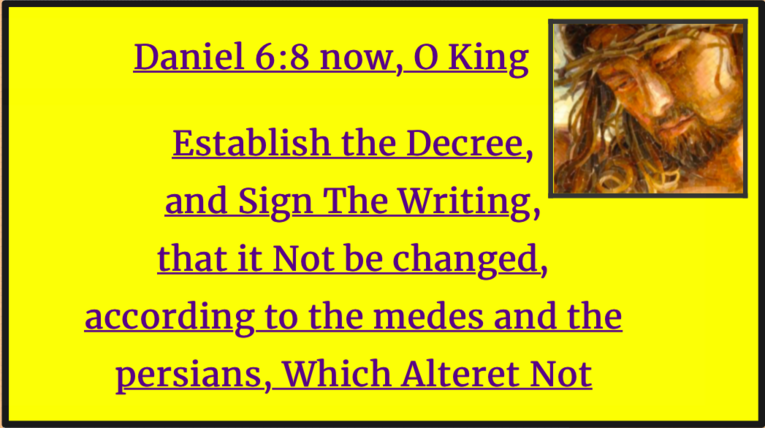 THE FRAUDULENT BREACH OF COPYRIGHT FORMS,

THAT MARIA RECEIVED FROM A SINGLE JUSTICE,

or, PLEAD GUILTY OR NOT GUILTY, ON LINE, 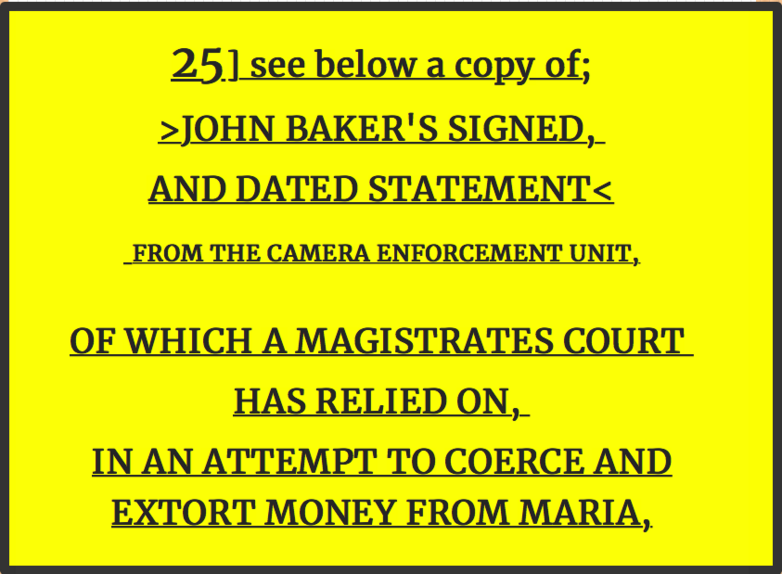 ​ON MONDAY SEPTEMBER 20th 2021,
MP Priti Patel HAS BEEN FOUND GUILTY BY JURY,

of causing loss harm and injury against 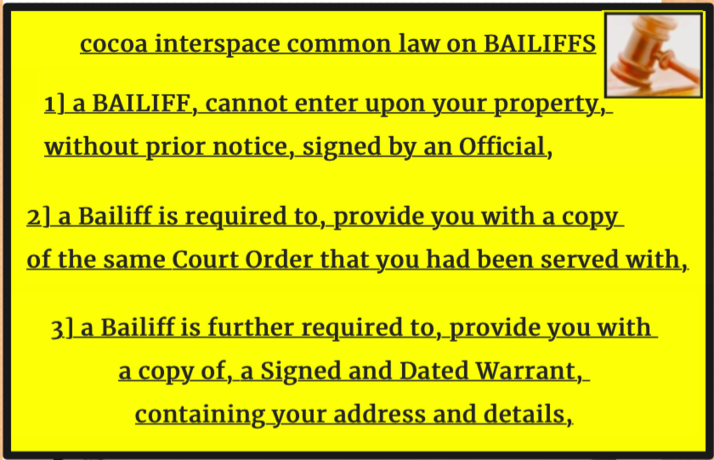 27] no one has notified maria gallagher, about the appointment of any Bailiffs,

according to an unsigned CDER GROUP,

of which CDER GROUP,

have added a compliance stage fee of £75,

claiming a total sum outstanding of £891 , 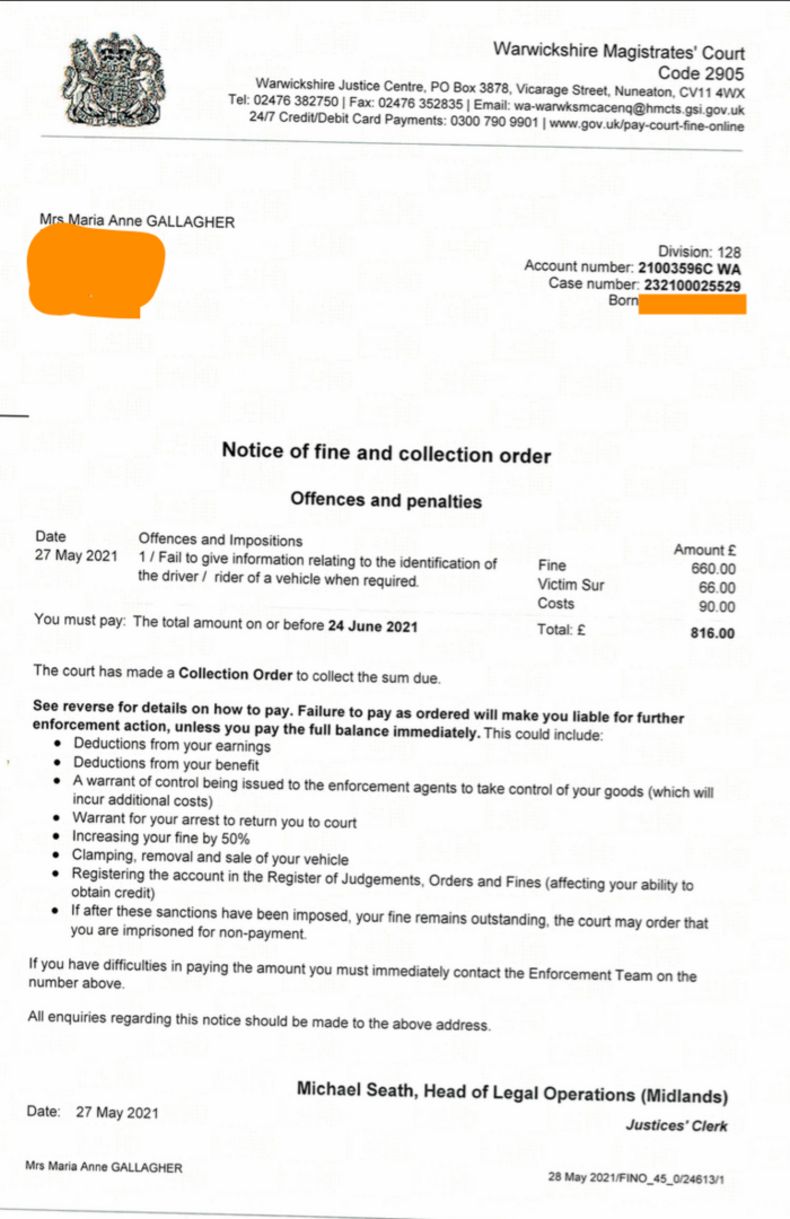 a Real Court, is A Court Of Record,

where justice can be seen to be done,

our common law requires a Magistrate

to be elected by the people,

on behalf of the people,

and not on behalf of a government,

the government have undermined,

our English Sovereignty by electing

their own pals to act as Magistrates,

Magistrates do not receive a Salary from

The Public Purse, because they are Not qualified in law, they can only deal with voluntary arbitration,

this is why a Magistrate cannot lawfully

the government have unlawfully legislated, 'CONTRARY TO COMMON LAW',

for Magistrates to replace Judges and Juries,,

Magistrates are unlawfully incarcerating people into privatised and foreign prisons,

Without Lawful Excuse, Without Trials,

and Without any Paperwork,,

and a Prison cannot be given any paperwork that you haven't already been given,,

Magistrates are not under oath to God,

and cannot replace 'sworn in Juries',

by turning Government opinions, into Judgments,

see below, Copy of the Camera Enforcement's

9] THE CAMERA ENFORCEMENT IGNORED EVERYTHING THAT MARIA HAD SENT TO THEM,

CONTRARY TO DUE PROCESS AND COMMON LAW,

10] THEIR REFUSAL TO PROVIDE

PHOTO EVIDENCE TO MARIA, MEANS THAT;

'NO COURT CAN HAVE ANYTHING THAT MARIA HAS NOT PREVIOUSLY, BEEN PROVIDED WITH',

20] THE POLICE AND THE GOVERNMENT,

ARE DEFRAUDING AND DECEIVING THE PUBLIC,

BY ENCOURAGING THEM TO ENGAGE IN

THE CRIME OF DEFRAUDING

and her Intellectual Property and Copyright,

without her knowledge or consent,

21] THE POLICE AND THE GOVERNMENT,

ARE ALSO COMMITTING THE CRIME OF TRESPASS,

AND AIDING AND ABETTING,

BY FRAUDULENTLY PROFITEERING FROM,

and her Intellectual PROPERTY and Copyright,

without her knowledge or consent ,

on how to proceed,  as the Notice is Unlawful,

due to the fact that,

PROVIDES US WITH A GOD GIVEN RIGHT,

TO READ THE ROAD AHEAD, AND TRAVEL,

ACCORDING TO THE CONDITIONS OF THE ROAD,

​​​IF WE CAUSE ANY HARM, LOSS, OR INJURY

IT IS COVERED BY OUR INSURANCE,,

[a speed restriction can only be enforced,

on a road, if there had been 3 or more accidents

'THE ON LINE COURTS'

ARE THE INVENTION, THE COPYRIGHT,

AND THE INTELLECTUAL PROPERTY OF; 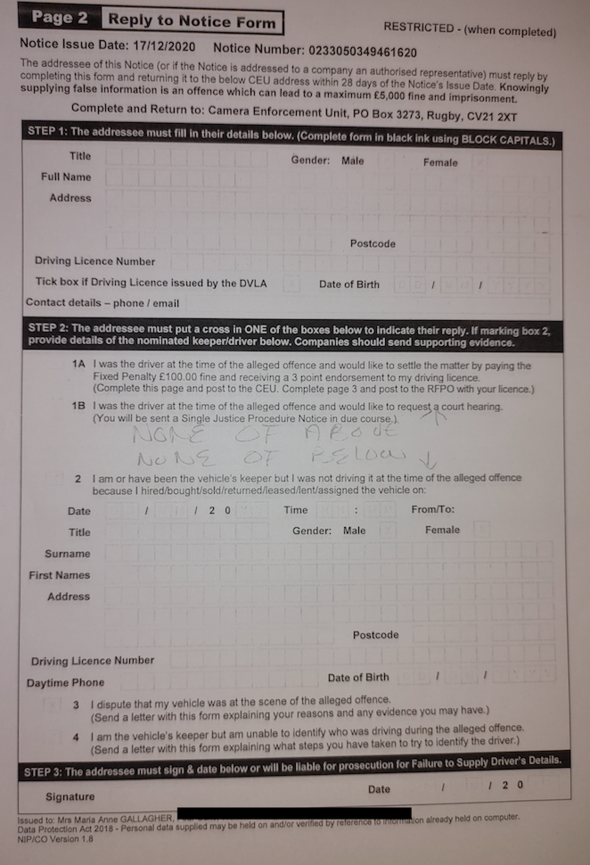 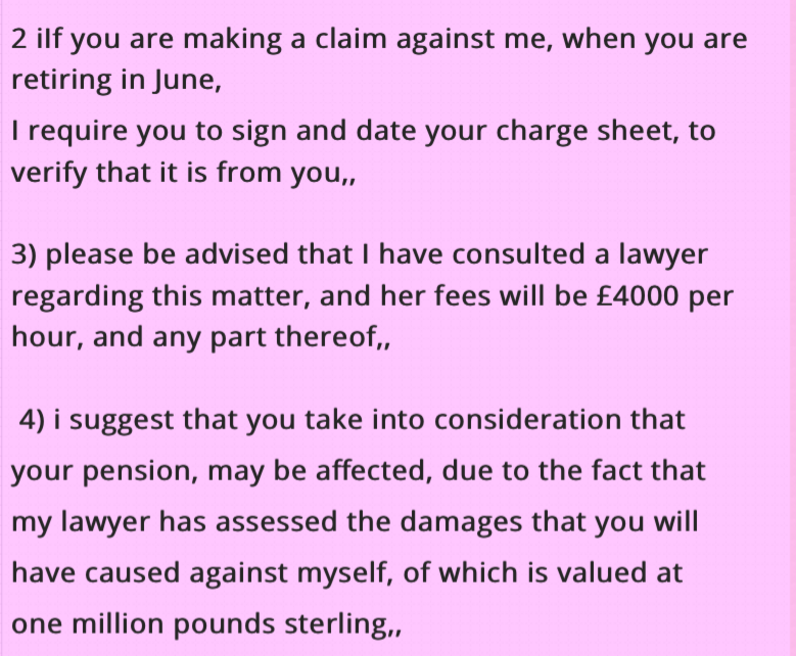 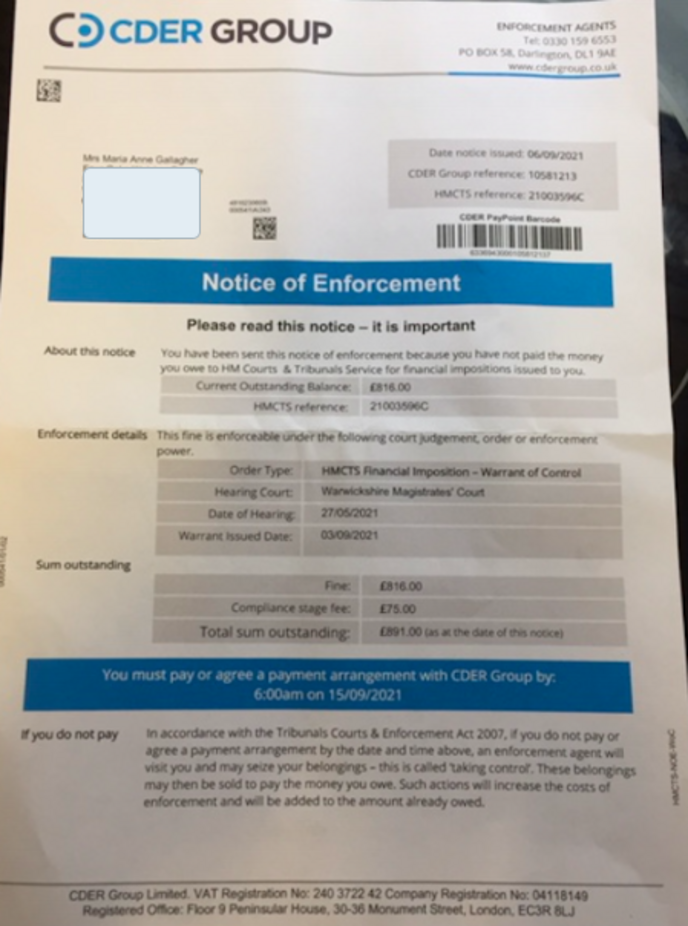 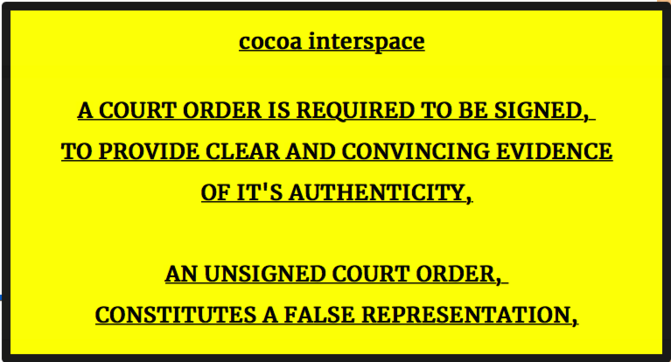 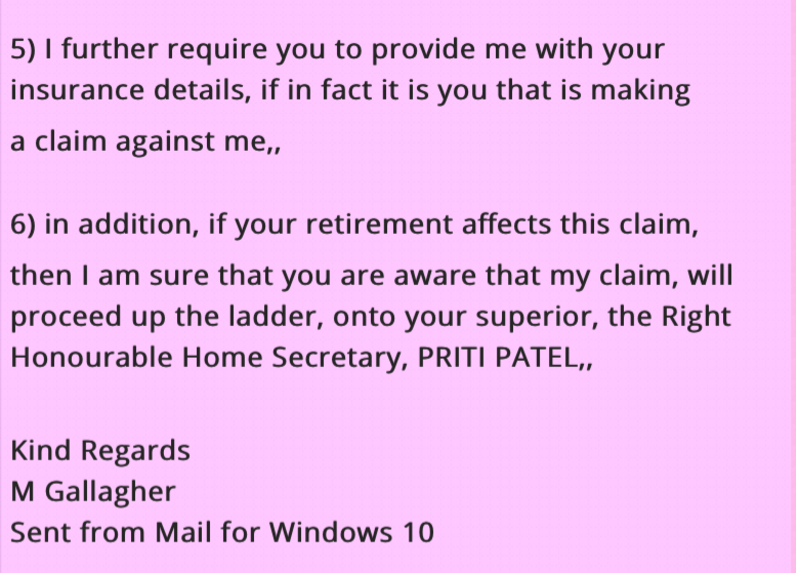 ​​​maria is a member of The Common Law Party,

of whom upholds our God Given Rights,

to Our English Biblical Common Law,​​

13] MARIA HAD NOT BEEN IN AN ACCIDENT AND SHE HAD NOT CAUSED ANY HARM TO ANYONE,,

THERE WAS NO COMMON LAW REQUIREMENT,

FOR MARIA TO PROVIDE HER DETAILS TO ANYONE,

ESPECIALLY AS IT CREATES A CONTRACT, 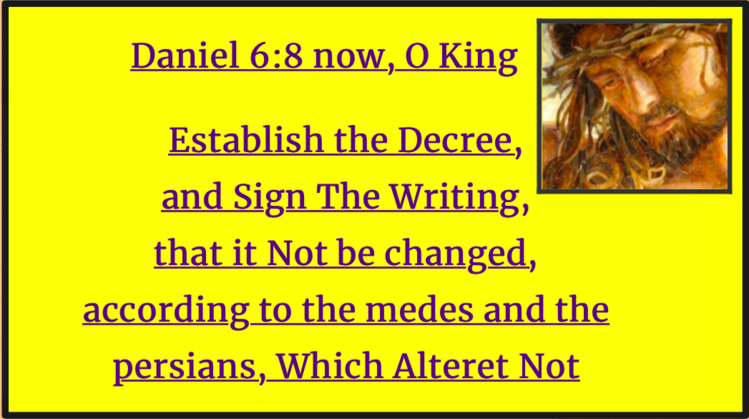 4] FROM AN UNIDENTIFIABLE ENTITY,,

within the Camera Enforcement Unit,

alleging that maria has a 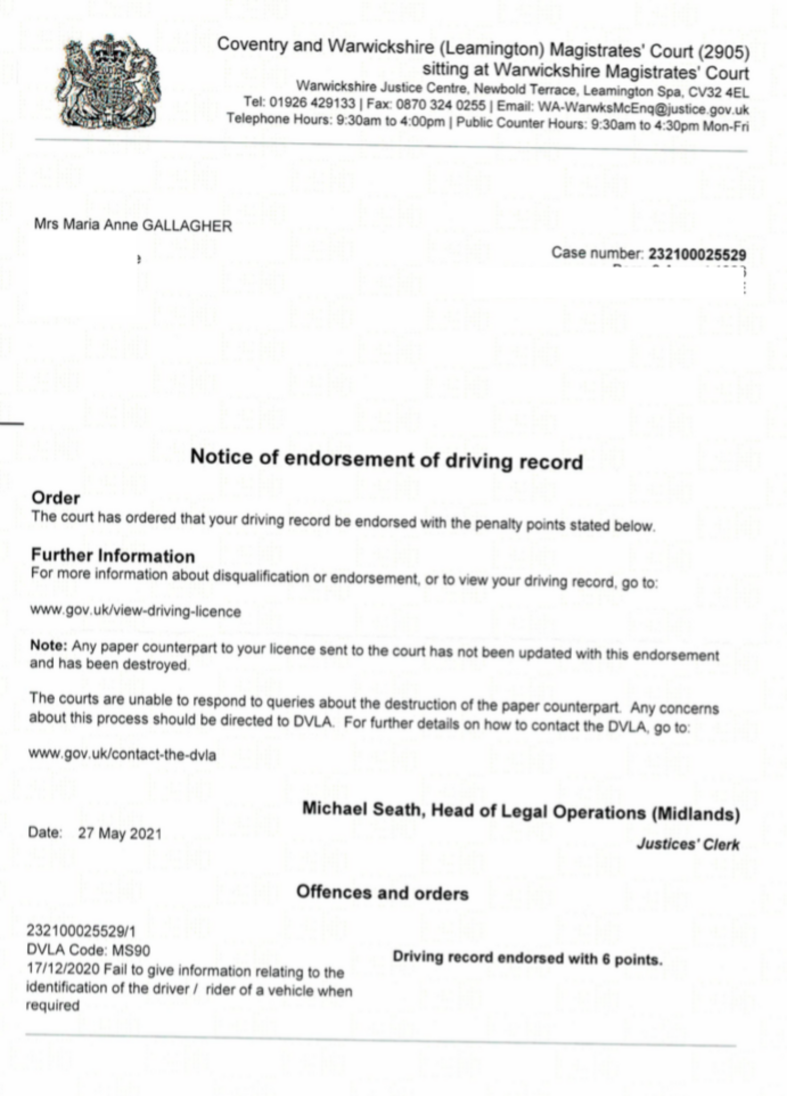 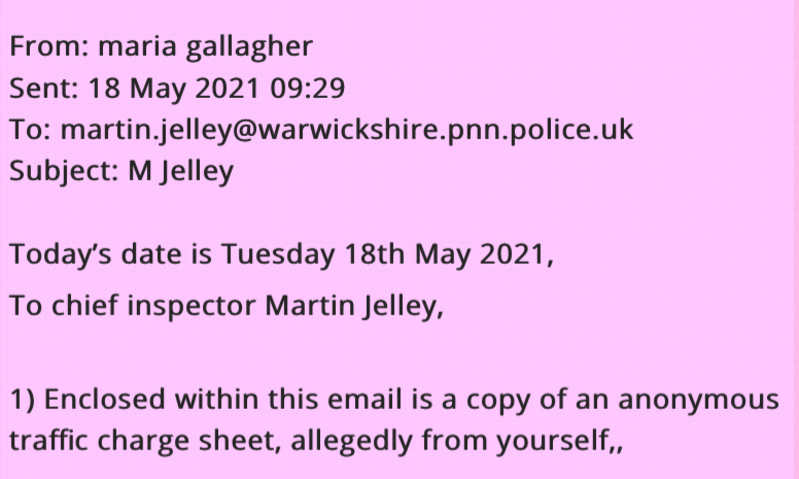 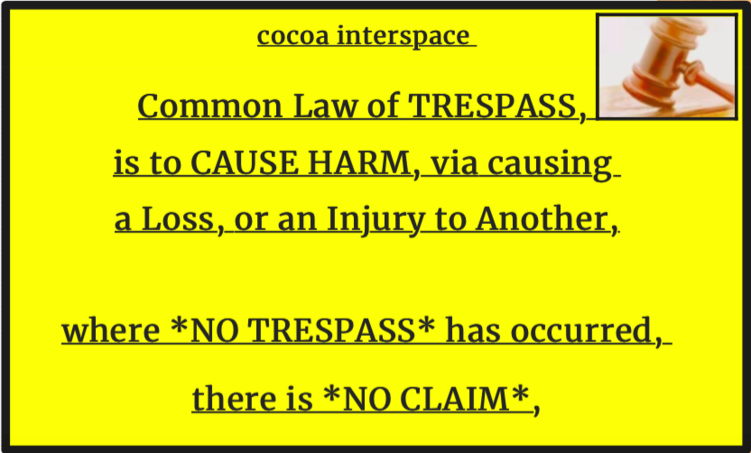 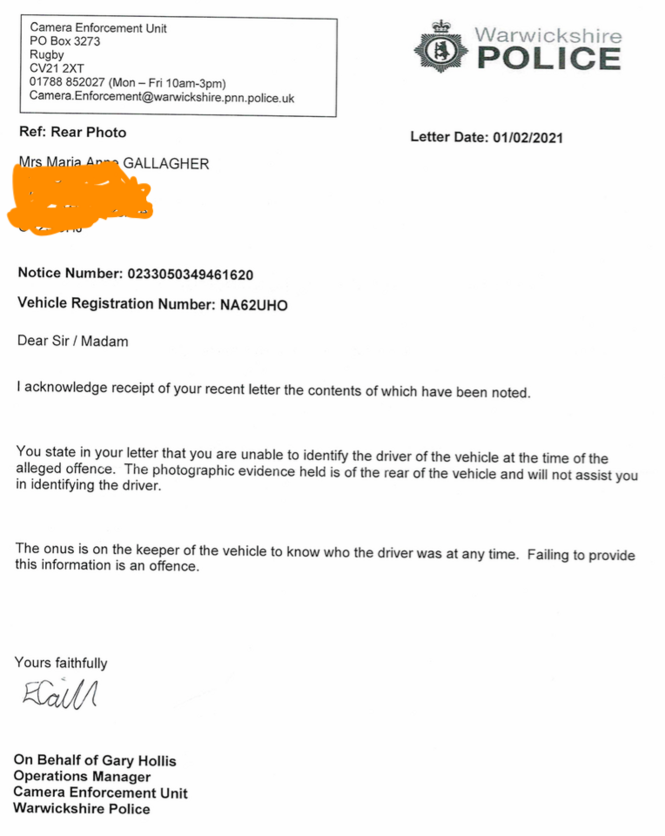 [on behalf of the Police Chief Constable],

​the 14th of december, is over 3-weeks after

of which is clearly not possible in the real world,​ 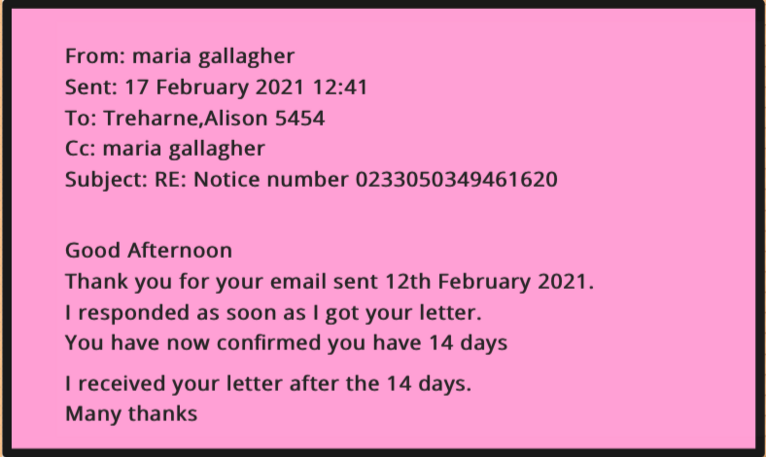 11] MARIA AGAIN NOTIFIED THEM, that that she

received their Notice OUT OF TIME,,